I don’t know about the rest of you, but I am a HUGE fan of the Olympic Games. Summer or Winter…it doesn’t matter. I love watching them! Canada doesn’t rack up the medals like some other countries do, but there is something to be said for the way Canadians come together during the Olympic Games.

I  was lucky enough to witness this first-hand. Never in my wildest dreams did I ever expect to be part of the Olympic Games, let alone be caught in the middle of it. I mentioned in an earlier post, when we were all getting to know each other, that I lived in Vancouver. I knew moving there that the city would be hosting the 2010 Winter Olympic Games. I was excited to just be living in a city where the Games would be held. I didn’t think I’d be up close to some of the most sought after sports.

While working for the Vancouver Canucks, I applied for a position in a company called Jet Set Sports. They are a hospitality company that caters corporate clients to the Olympic Games, and now the World Cup. But back then, it was just Olympic hospitality. Never having heard about this company before, I  applied on a whim. Now, having worked for the best of the biz…Walt Disney World…I thought I had a good shot at getting an interview. I did. And then I was hired on as a hostess.

Jet Set Sports is the best in Olympic Hospitality. They seek out the best hotels, restaurants and experiences for their clients. They cater to the wants and needs of their clients to the enth degree. As soon as a host city is named, they send a team to that city to start their planning. Their clients needn’t worry about a thing! It’s absolutely incredible what they can achieve.

The training wasn’t difficult mostly because my love of the Games paid off. I already knew the sports involved in the Winter Games, and the venues I had been reading about since moving to Vancouver. I also worked for a hotel when I first moved to the city, so I was knowledgeable in the areas of the city and had a spiel already in my head. The only thing that most people struggled with was the public speaking. Which is natural of course.

So the world came to Vancouver for two weeks. It was a whirlwind! My team was small, consisting of my manager, two host/hostesses and a hospitality suite hostess. I was a hostess, which meant I was on the go with my clients everyday, all day. Which seems tiring, but with the energy of the Games, the two weeks were gone before I knew it.

My client purchased in their trip tickets for their hosts to join them at every event. Luckily, my client appreciated men’s and women’s hockey, curling and speed skating. If I wasn’t in the suite with them, I was sitting in some prime seats at every event I attended. It was fantastic!

The city was alive! Streets became pedestrian only so that tourists could travel without the hassle of cars. Countries set up their ‘houses’ in the downtown core, so that the public could join in on the festivities. You could walk into Canada house and have a pint with one of the athletes if you were lucky enough! In Robson Square, there was an ice rink and a zipline that people could try! This is the sort of thing you don’t see on TV when they air the Games. You don’t get to see what’s really going on in the host city.

My Games time experience was beyond what I could imagine. Remember when Canada beat the USA in both men’s and women’s hockey? I was there! In that very arena where they accomplished it! At the men’s game, I had the absolute pleasure meeting one of our gold medal Olympians, Jon Montgomery. He won gold in the Skeleton, and drank a pitcher of beer in Whistler when celebrating…you may remember the video.

The Games came and went. The city fell silent. It was as if I had just imagined the whole thing. Athletes talk about a post-Olympic depression. They’re on a high for two weeks, and then it’s all done. It was a low feeling I felt after the Winter Games were finished. I hadn’t even competed, and I felt a little depressed that this was all over so soon. I immediately looked into the next Olympic Games. I asked the woman who hired me about London 2012. She said that if I applied, I would have an excellent shot at coming to London to work for them again.

I moved back to Ontario because if I was going to London, England, I needed to save money. Living in Vancouver and saving money…..not going to happen. While in Ontario, I brushed up on my Summer Games trivia. I was always on LOCOG’s website, learning of the venues and what made them special. I was determined that by the time my interview came around, I would be ready!

I nailed it! I was on my way to London! A few friends of mine made it too, so we all planned to move overseas together. London 2012 was a completely different feeling from Vancouver 2010. I remember Canada being so excited that the Games were being held in their country, that we all couldn’t wait for them to begin. London…not so much. There wasn’t a shred of evidence that the Games were coming to the city when we moved there in January. There was a feeling of annoyance rather than excitement that the Games were coming. People weren’t pleased that the world would be coming and clogging up their beautiful city.

The client this time around was less than desirable. They thought we were their butlers and expected us to wait in line for waters and beer. We barely saw any of the events we had tickets to because we were always qued up for something. Our seats this time around were often in the nose bleed sections.

Some of our guests were reluctant to go to any of the events that they had tickets for, and instead wanted to go shopping at Harrods. Jet Set seats are prime seats! Everyone on TV would see 30 empty seats where my clients were supposed to be sitting. I remember our team sitting in them and putting bags across seats just to make it look like people were there. This happened more often than not.

The overall London 2012 experience could not compare to Vancouver 2010. I was lucky enough to see Phelps swim and Bolt break a world record, but I was wanting these Games to end this time around. I couldn’t wait to be finished with them. It was sad because I do love the Games.

I decided that after London, I was done with Jet Set Sports. Not because I didn’t enjoy working for them, but because the next host cities were not ideal. I didn’t want to go to Sochi, Rio or South Korea. So I’ve been sitting the last few Games out. And I’m more than ok with that! I’ve enjoyed watching the Games from the comfort of my living room! 🙂 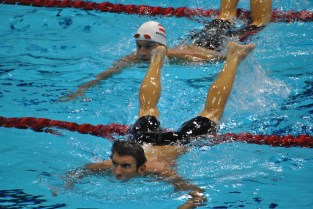 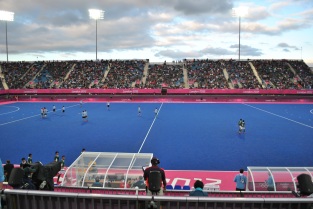