It was an early rise today after our first pub crawl together. Not easy. We may not have known much about each other yesterday, but we woke up this morning knowing all too much! Today, we’re making our way to Belfast, the birthplace of the Titanic!

Our first pit stop was on the side of the road along the Antrim Coast. Dunluce Castle was in the distance. Even from where I was standing it was a thing of beauty. I don’t know much about its history, but we did know it was a dramatic, violent one. Sadly, we didn’t go inside to explore the archaeological findings or wander through the old cobble stoned streets. It was just a quick stop on our way to the Giants Causeway. 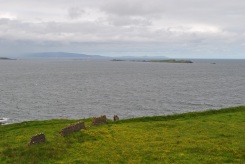 Giants Causeway was formed due to volcanic activity over years and years. The basalt stones are all identical in shape. Most are hexagonal, but it is said some may even have eight sides to them. Now, there is an Irish folklore that explains how the stones were created. It involves a gentle giant named Finn McCool. He built the causeway to cross the sea to another giant, Benandonner. Due to exhaustion, Finn fell asleep along the causeway. By sunrise, Benandonner had made his way across the stones to face Finn. Luckily, Finn’s giantess (wife) had covered him with a blanket and warned Benandonner not to wake the bairn (child). Out of fear of the bairn’s size, Benandonner worried that Finn would be much larger than he and he ran back across the causeway, destroying the stones along the way. And thus, the Giants Causeway was created. 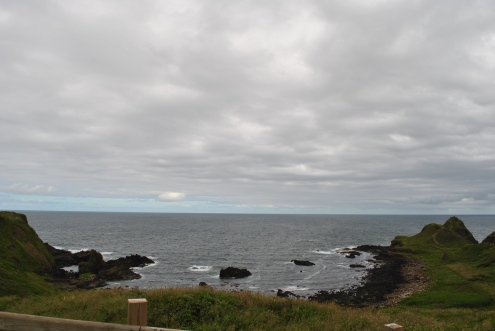 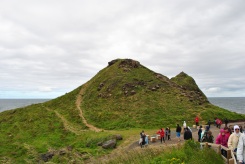 Walking along the path to the Causeway 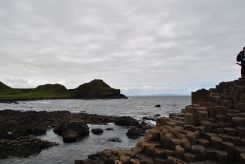 It is an amazing spot to visit in Ireland. To see it in person just blows my mind. Although the day was gloomy and clouded over, the sheer beauty of this place is never dulled. We were provided an audio tour to get better acquainted with this Heritage Site. You walk along the coast line stopping at markers and get lost in the view. As is the case with any walking tour, do dress appropriately for these things. I can’t tell you how many people I had seen wearing flip flops or heels wandering around Giants Causeway. Climbing those rocks is not easy. Be sensible!

After our group wandered back to visitor’s centre, we hit the road again. We were set to stop at one more location before making it to Belfast. Another tourist draw, the Carrick-a-Rede Rope Bridge was a breathtaking experience. It was traditionally built for fisherman to reach Carrick-a-Rede Island to cast their nets out to sea. Today, it draws in the tourists to take the rope bridge challenge. If you have a fear of heights, this may not be your thing. But you can’t beat the views! When looking out at the ocean, you would think you are somewhere tropical. The greens and blues of the water would make you believe you were in Mexico.

Now due to weather, especially high winds, this attraction often shuts down for safety reasons. If this is on your Ireland ‘must see’ list, be sure to call ahead to see if it’s open. We were lucky enough the winds weren’t too bad today. We walked along the coastal path to get to the bridge. A que had already formed. Once we descended upon the bridge, you could feel the force of the wind pushing the bridge. Looking down, you can’t really get an idea of how high you are. The bridge is 30m (100ft) above the water. It’s not the highest suspension bridge I’ve been on (Capilano Suspension Bridge in Vancouver has it beat at 70m/230ft), but it’s honestly one of the most beautiful things I was lucky enough to witness on my trip. Once we made it across, you can tour the small island. We decided not to because the que going back across was about a 30minute wait. So we hopped back in line to get back across the bridge. 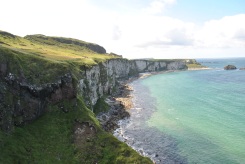 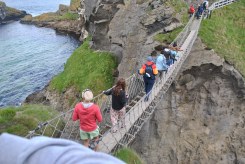 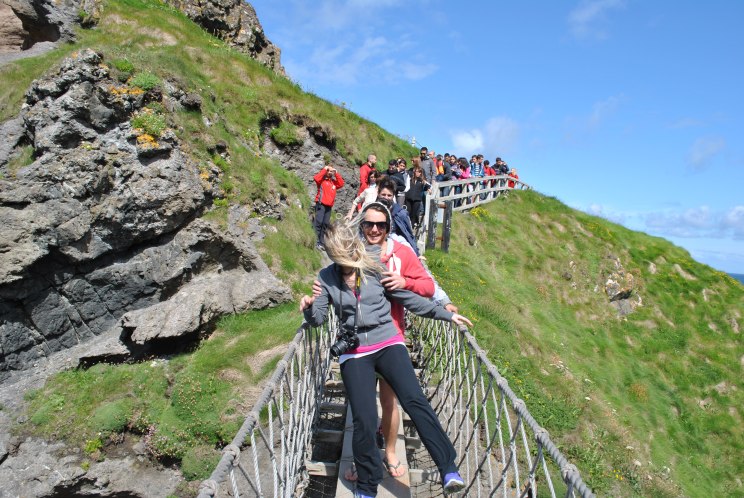 Not realizing I had stopped, Keegs ran into me nearly pushing me over!

Now that all of us had survived the bridge, we were back on the bus and Belfast was our next, and final, stop for the day! We had arrived, but before checking into our hostel, we were picked up by a few black taxi’s for a tour of the city. This tour was beyond amazing. Honestly, if you’re in Belfast, do look it up! I learned so much about Belfast and its history through this tour.  It shed light on the ongoing tension between the Catholics and Protestants. Just one day after their annual rioting, which shut down the city, we could see the remnants of the tension that takes hold of this city.

There were massive bonfire pits, or what was left of them, in open spaces amongst the homes. You could see the twisted metal and melted beer bottles laying in its wake. Our guides had told us these fires reach some 30 feet high the day before. We made our way long houses with graffiti on them, representing either side of the fight. Our tour eventually made it to the peace wall. This wall divides the city in half. Every evening the gates are closed – so you best be on the right side of the wall before it does. While writing messages of peace and hope on the wall, glass bottles and rocks were being thrown in our direction. Our drivers told us to get in the cars immediately, and we quickly drove off.

In Belfast, what remains of the bonfire 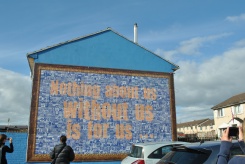 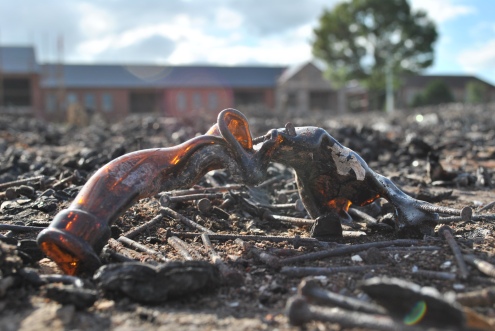 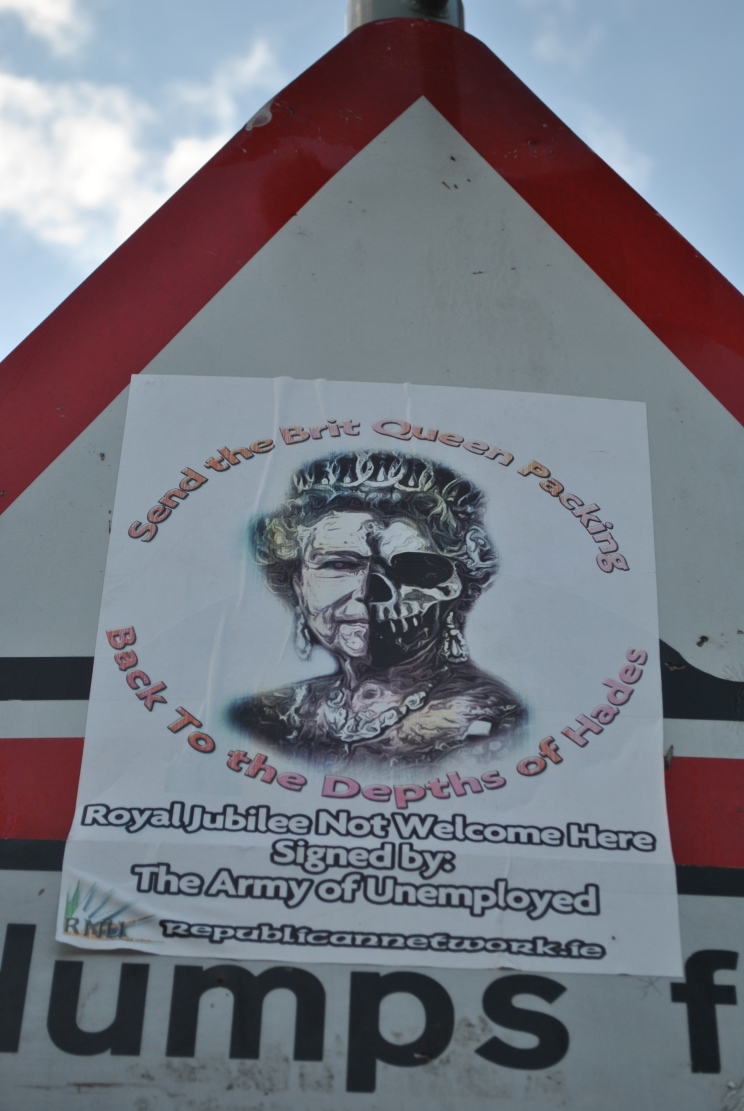 It was an eye opening tour for sure. I enjoyed it immensely. After the tour finished, we were dropped off at our hostel to check in. The evening was ours to have, so we decided to all go out for dinner. A sort of family gathering if you will. They soon became a regular thing in our group throughout the tour. It was a nice evening out. Sandra and I made our way back to the hostel afterwards. We managed to have a quiet night in.

The one thing we didn’t get to do in Belfast was the new Titanic exhibit. I tried to work it into my day, but was told by our driver that to only get two hours there is not enough. And honestly, I’m glad I didn’t miss out on the black taxi tour. So having not seen the exhibit, it gives me a reason to go back 🙂

Tomorrow’s adventure takes us from Belfast to Galway — the party capital of Ireland. Until next time….