So I think I’m extremely late to jumping on the bandwagon, but I’ve just finished binge watching the first season of Outlander. I can’t help but fall back into my own memories of visiting the Scottish Highlands a few years ago.

It was an adventure from the beginning. My bestest and I took a 12hr bus ride from London to Inverness. Seems crazy, right? Of course it was, but it was by far the cheapest way to get to Inverness. I’m all about trying to find a good deal when it comes to travelling. Anyway, the bus ride actually wasn’t too bad. I saw the country side of Scotland that I wouldn’t have had the pleasure of seeing from a plane. It is more stunning in person than on film. Words cannot justify its beauty.

We arrived into Inverness feeling pretty disgusting after having just slept on a bus. It didn’t dampen our spirits though. It’s a great feeling being in a city/country you’ve never been before. Inverness did not disappoint.

The bus to Drumnadrochit wouldn’t be leaving for a while, so we spent the day exploring as much of Inverness as possible. Contrary to many people’s warnings, the weather was beautiful. Sunshine for days, storm clouds brewing miles away. I couldn’t have asked for a better outcome.

Inverness is rich in history. It’s known as Scotland’s ‘Highland Capital.’ But it’s probably most well known for its proximity to Loch Ness where the longstanding legend of Nessie, the Loch Ness Monster, is said to live.

Our walk through the city led us to Inverness Castle which sits upon Castle Hill. Today the building is used for the Sheriff’s Court. It was built in 1835 and it overlooks the river. Unfortunately, visiting the Castle is not allowed as it is a court of law. 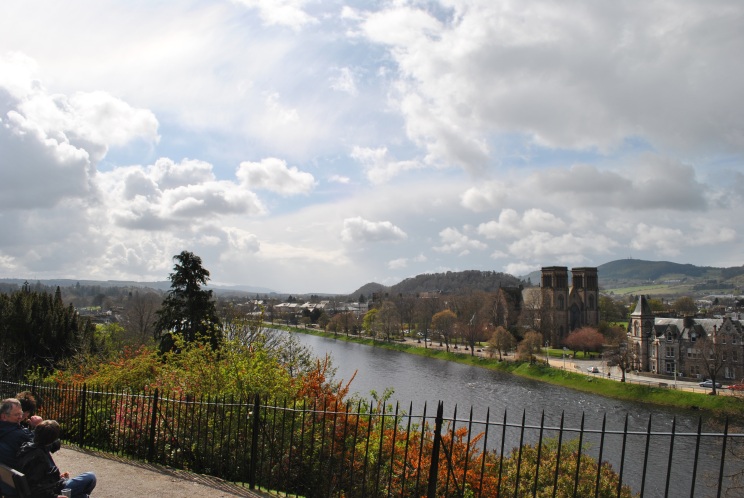 We kept wandering the streets, ending up in a cemetery then back to the main street. It was time to catch the bus and travelled south to Drumnadrochit. Try saying that 5 times fast. Chloe couldn’t say it until we were back in London…:P

Our lodgings in Drumnadrochit was the, and you’ll get a kick out of it, Loch Ness Lodge Hotel. It looked like a castle, built of stone. Stepping into its doors was like stepping back in time. Our room was ceiling to floor plaid. The blankets were plaid. The curtains were plaid. Everything plaid. The room was freezing. No built in heaters in the rooms, but they provided us an old heater. We didn’t trust it enough to leave it on during the day. There weren’t enough plaid blankets to keep me warm that night.

It was a cute place to stay for our Nessie hunt. The next day we ventured out determined to get to Urquhart Castle. We were told it was a mile walk up the road. Pff…easy peasy!

She was so, so wrong. It felt like hours we had been walking. We happened upon a highway sign that read ‘Urquhart Castle – 1 1/2 mile ahead.’ We had already walked at least a mile by that point! There was no point in being angry. All you had to do was look around at the beauty that is the Highlands and feel like you’re in a dream. Eventually, we made it to the Castle. The gentlemen at the reception were amazed we had walked from Drumnadrochit. And they probably thought we were dumb tourists. In any case, WE MADE IT! 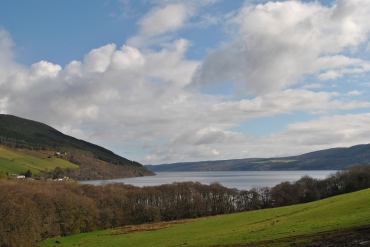 The Castle did not disappoint. The ruins are wondrous. They made me feel so small despite its lost grandeur. At its height in history, I can only imagine what it looked like as you walked over the same hill I had that day. What a sight to behold, I’m sure.

It sits on the banks of Loch Ness. The waters of the Loch are black. I’m amazed of the number of Nessie sightings with water as dark as that. It’s history begins in the 1200’s and has only known bloody conflict through its 500 year history.

Looking out at the black waters of Loch Ness
It was once Scotland’s largest castle. The audio-visual display at it’s exhibition is a great way to learn its history. If ever you find yourself in Inverness, a trip to Urquhart Castle is an absolute must! I can’t imagine a better way to spend a day in the Highlands.

Our last full day in Drumnadrochit was spent on a cruise of Loch Ness. With hopes of spotting the elusive Nessie, Chloe and I had our cameras ready for anything! Sadly, we never did get a glimpse of her. But the cruise was worth the money. It is always a good idea in any city you visit and that allows it, to view the city from the water. It is such a different view that you’ll never experience from land…obviously. Seeing Urquhart Castle a second time from Loch Ness’ waters was breathtaking. With the storms clashing the Highlands to the north of us, and the sun lighting up the castle from behind, it was a perfect way to end our adventure.

Also worth visiting if you’re in the area are two sites that are off the grid a bit. Again, having walked the majority of the way to these locations, the walk wasn’t in vein. Clava Cairn is a Bronze Age burial chamber located east of Inverness. There are 3 large circular burials made of stone. Walking inside of them gives you an eerie, yet calming feeling.

From there we made our way to the battlefield of Culloden. For you Outlander fans, you’ve heard of this in the show. It was a bloody battle between the British Army and the Jacobites. Unfortunately, it took less than an hour for this battle to conclude. Over 3000 Jacobites died that day. There are tombstones and a large cairn on the battlefield today. There’s a relatively new visitor’s centre as well. I was lucky enough to visit one day before it’s anniversary. 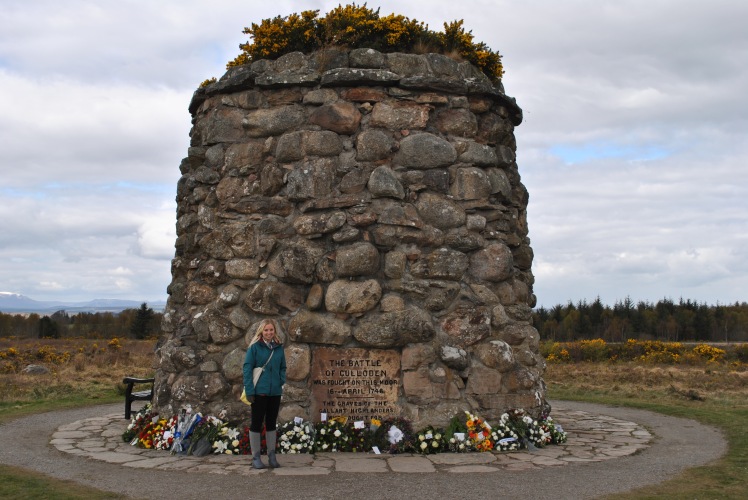 It’s amazing that a tv show can bring back such memories of an adventure I’d taken some time ago. This post makes me want to go back to Scotland. Inverness and Drumnadrochit are just a small portion of a country I’d love to continue to discover. I wonder what memories season two of Outlander will bring back to me… 🙂